According to the BDN, “Janet Mills signed emergency legislation that allowed Maine Department of Inland Fisheries and Wildlife Commissioner Judy Camuso to adjust the state’s fishing laws to that reality. In the northern zone, where ice fishing season was to end March 31, the season has been extended until April 21.” Big Wood is still over 3 feet thick so plenty of time to catch “THE BIG ONE”.

Continue to use caution though as things can change quickly this time of year.

Come on up, the ice is fine! 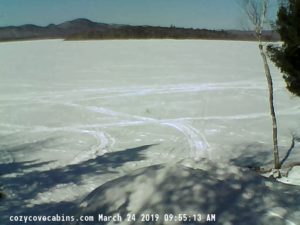 A snapshot from our webcam this morning.

It is a beautiful sunny, cold and breezy day out.  The group of riders leaving today had nothing but good reports on the trails in the area.  Ryan did over 300 miles yesterday.

Reports from surrounding clubs are also pretty good.  It’s not too late to get at least another week of awesome riding.

The Border Riders Club will continue to groom until April 15th as long as the nights are cold.