Over the weekend, our guests staying in Jester, told us they saw a mamma turtle laying her eggs by the boats.  What a treat for his boys to see nature in action.   Dad told me that after the Turtle finished making the nests, she went into the water, turned around, as if to be sure her eggs were OK, then swam off into the lake. He said he took pictures but has not yet sent to me.

Earlier today, we found another mamma turtle laying her eggs.  We saw her in one spot digging the hole: just fascinating to watch as she digs the hole with her hind legs.   Then we left her alone to give her some privacy.  About an hour later, we went back down, she was gone and it looked like she made 3 nests. 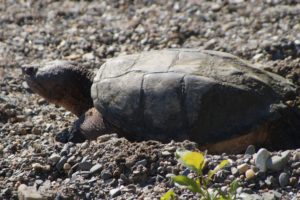 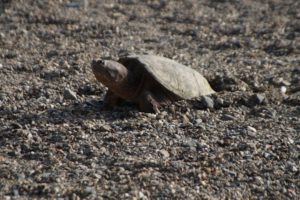 Of course, the first one made the nest right by our boats.  We put a marker there.   And this gal chose to make the nests in the walking path to the water.   We chose to mark the areas with yellow tape. 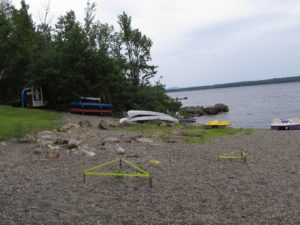 Mother nature will do what it does but at least, the areas will not be stepped on by us.

Snapping turtles lay from 15-50 eggs and they can hatch from about 60-90 days.  SO sometime late August or September, maybe we will see the babies running to the water. 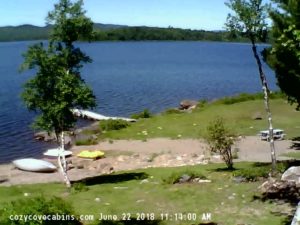 Today is the first day of summer and I do believe it may have arrived in Jackman too.  Beautiful days of sunny blue skies, gentle breezes, and cool nights.  Wait, cool nights do not usually happen in the summer!