The warm weather last week, a bit of rain on Saturday evening then a freeze began early Sunday morning with temperatures in the 20s and high winds.  Because of the melting snows,  have a bit of water issue out on some trails.   Use extreme caution out there.  Clubs have been trying to mark areas of concern for you.

A  big area affected  is 89 north. The Border Riders CLub has closed this trail to the border. as of today.  I understood there was another area affecting the Sandy Loop trail.  You are still able to get to 88 to get to Pittston.  The border loop that runs the west side of 201 is reported to be in good condition.

Going south to Parlin, near the Attean lookout is another water hole but we have not been told the trail is closed. Just keep an eye out.

Brief report from Blue Ridge say the trails toward Rockwood also with water on the trails but we are not sure of the conditions.

Pittston Farm is reporting good riding up that way.

Steve went out with the guys this afternoon to check out our trails and said they were all in pretty good shape. SO all in all, not too bad. Now what will Mother Nature bring this week.   Safe riding to all!

FEBRUARY 28th UPDATE:   The BRC have now reopened 89 north.   Water has passed through.  They guys have been out marking affected parts of the trails so watch for signage and be safe.   Rain tomorrow?  Could make more puddles and openings so again, just use caution.  As of today, some good riding out there still.  And cold weather again Wednesday night.  What a weather roller coaster!

Then it got warmer both day and night. I think one day we hit 59.

Fortunately, a majority of the trails are holding up as we had a pretty solid base. As of today, February 25th, our guests say once you get out of town, there is some decent riding: up to the border and over to Pittston Farm were good. Many area soft but good.

Rain is expected tonight through most of Maine and then the cold front to come in Sunday night.  There is a forecast for snow mid week but we will have to see what Mother Nature does.

I do not believe the snowmobile season is over yet.   March is going to bring it!

A couple warm days this weekend have not ruined the trails in Jackman.    Denise and her family did the border loop on this chilly but sunny day.  They said the trails were in great shape, smooth and flat.
She shared some awesome photos with me today but they are here for the week so there will be more.
When she took this picture, she said, “With the sled turned off, the only sound you hear is the wind blowing through the trees. I could have sat here for hours.” 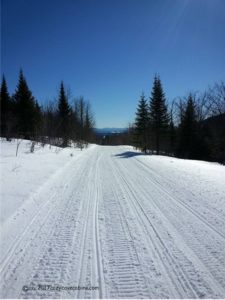 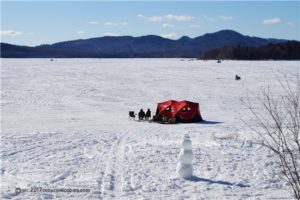 Tammie and her family have been out on Big Wood all weekend, trying to get the “big one”.  In between fishing, they built a snowman and the kids went sliding down one of the many mounds of snow.  They sure look like they have been having a good time!

We have had incredible weather this weekend to be out on the ice.   Luckily, very little wind and blue skies.

As of April 1st, 2017 we will have a slight increase in our base rate for our large cabins (1-3 guests).  The other cabins will stay the same as well as the rate for each additional guest. ​Visit our rate page on our website for more information.
We also increased our dog fee to $10.00/stay. Whenever we travel with Maggie, we pay about $10/night so we do not think this is unreasonable.
Also if you have already made reservations for this year before today, you will pay the rate quoted.

Sandy Lang and her photographer from the magazine Maine. The Magazine came up to Jackman for their first time snowmobiling.  Friends of ours gave the riding tour.

The wrote a nice article about their experience along with some nice photos.   Check it out!

Here is the link to the story.

What a great snowmobile season so far.  We have a great base and every week we are getting snow in small amounts which lets the groomers work their magic. We know you all come up to ride but there are a few events around town that you might want to attend.  Support the trails and have fun!

On February 18th and 19th is a Groomer Fundraiser at the Long Pond Grooming Headquarters.  From 8am to 4pm, they will have breakfast sammies, burgers, hot dogs, pulled pork and chicken sammies.  All DONATIONS go toward grooming operations. By snowmobile, they are right off the loop trail.  If you want to drive over, take the 6/15 to Loop Road.

March 4th is “Reggie’s Ride”. which is a family ride from downtown Jackman to Arnold Farm Sugar House for a tour. Then back to the Northland for dinner and AUCTION.

March 5th is the Turner Pond Breakfast – ride your sled or drive into Turner Pond for breakfast between 8am and 11am. Everyone is welcome.  A shuttle will be available from the Holeb Road.

March 11th and 12th is the Northwoods Sledfest at Historic Pittston Farm. $10,000 in prize money. Fun for spectators too.

For those of you who want to try Ice fishing, Free fishing days are February 18th and 19th in Maine.

Let the trail riding begin!  It is just my opinion but it seems that February is the best riding in our region.  We have snow in January and the trails are open and decent but seems like building that solid base of snow, ice then snow is what usually happens.

By February, the base is great and we get more snow and low temperatures, allowing the groomers to work their magic and keep the trails in top condition.  Which is what is happening now. We were minus 11 this morning and it is snowing now.

Last week, we had some warmer temperatures and a crazy amount of people over the weekend (reciprocal weekend) so no matter how much work our groomers did, the trails were never given time or cold air to set up.    Some riders complained they were really bad and others said they were great.  As usual, a matter of opinion and also where and when they rode.

The Border Riders Club reports all trails in our region in all directions are good to really good.  Long Pond loop offering option south as well as East.

Rockwood club and Pittston are both reporting good trails this week also.ITS 88 and 66 will be groomed tonight. A new trail to Long Pond opened and another from Kokadjo trail or from Pittston Farm to the NE Carey is good.

Going south, 86 to Grand Falls was groomed but will need a couple more passes. 87 from the power lines to West Forks was not groomed yet. All other trails south of Jackman were looking good according to the clubs.

So there you have it.  Our weekends are full but if you can, book a few nights during the week with us to get in some great riding this month.  And don’t forget about March riding!    Could be even better.

The attached picture shared to FB by J.T. was taken 2 days ago. 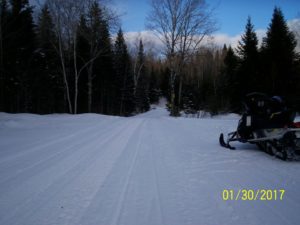