BBRRRR!!! The wind chill has been pretty chilly this weekend. Even though the sun is out right now, as you can see from this snapshot from our webcam, the lake has begun to ice over. 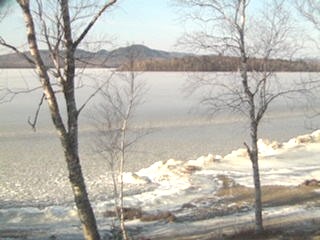 I am sure it is very thin and one good windstorm will break it up but it is a start! happy fishing 🙂

As promised, Tommy sent me the “shots” of the buck he got. VERY COOL ❗ ❗

Well this is the end of the 3rd week of deer season and many of the hunters this week were discouraged. This week was incredibly cold, about 20 but a chill factor of about 1. The winds were brutal here on the lake but even worse up in the mountains. Even though we did have some snow, it was not enough. Every step they made was a nice crunching sound.
Some hunters said it was just too cold: said the deer were not roaming about. Other said it was too noisy to walk out in the woods and then some said there are no bucks at all ❗
Well, coming soon, I will post proof of at least one 8 point buck roaming these woods! (besides of course, all those tagged at Bishops Store) One of our guests had the high tech outdoor infrared cameras. They mounted them for the week in 2 different spots. He could not look at all of them but did see a gorgeous 8 point buck on a few shots. He promises to send me the shots which I will post to PROVE there are still some big bucks in the region.

We had some rain last week and I guess it was enough to raise the lake water. Combine that with some wind and cold air and our bottom yard is now an ice skating rink 🙂 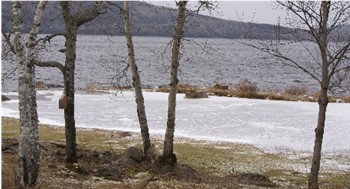 This week, as the wind started to blow, the water was freezing on the bushes and rocks. I was hoping to get a sunny day to snap another shot of our “ice skating rink” with all the glistening ice behind it but alas, no sun for days 🙁

WOW ❗ The winds last night were incredible. (We really need to get a wind gauge around here – Christmas is coming 😉 )

Anyhow, I was sitting in the living room watching the Steelers – San Diego game in Pittsburgh, (It was snowing there ❗ ), being very disappointed in the Steelers by half time. Then 2nd half began and they stated to show their true self and wouldn-t you know it, there went the power. I should have counted on that happening as it was really blowing hard.I was the first call to notify CMP but thee were already about 20 towns out of power by 6:15. The power came back on about 8ish but the game was over. I had to call a friend to find out the score-the lat few minutes were really good they said Sorry I missed it 🙁

So today although the sun is out, there is still a brisk breeze and it is about 20 outside. BURRR ❗

It is almost time to get out your sleds and come up to Jackman to ride the trails. This week, the Border Riders Club began their TRAIL FUND RAFFLE for 2009. Each ticket is $10.00 and there are daily winners which are posted on their website. Proceeds of the raffle go to the purchase of a new groomer.

The Club does an excellent job in maintaining and grooming the trails in the region but they could use our help. Contact the Border Riders Club at www.borderridersclub.com/home_f1.html for more information on the raffle or if you would like to join or are able to come on up to help the club make the trails ready for the 2009 season.

With all the woods and wilderness that surrounds this town of Jackman, Maine, you would think that it would take a little time for the people in town to know you got a buck. Not so ❗

Freddie got a buck last week. Before he even made it back to town to have it tagged, his son was as Bishops Store waiting for him:?
And our friend, Bill, heard about it in the grocery store also…before Freddie had it tagged.
So I guess the moral of this story is, watch what you do as the news travels fast around here.

I hope everyone got out to vote today. I hope everyone is taking advantage of our webcam overlooking Big Wood Lake because today was an incredibly beautiful day. Started out a little cool but by noonish, the sun was out and it really warmed up. I did forget to look at the thermometer but it was warm with a touch of cool air.