The weather forecast included rain and 40 degree temps so it had me a bit concerned for the trails but all should be good. I spoke to a groomer yesterday who said that the trails are in good shape and even a little rain should not impact them too much.

The temperature here went up to 38 today and we did have a little rain but no major downpour. And now, it is 4pm, 🙂 I am happy to say… BBRRRRRRR ❗

The temp is 28 and the wind kicked up so we now have a little sideways snow happening here. Where did they burst of cold wind come from?

So anyhow, Come on up to Jackman to ride. You can still get home to watch the game on Sunday. 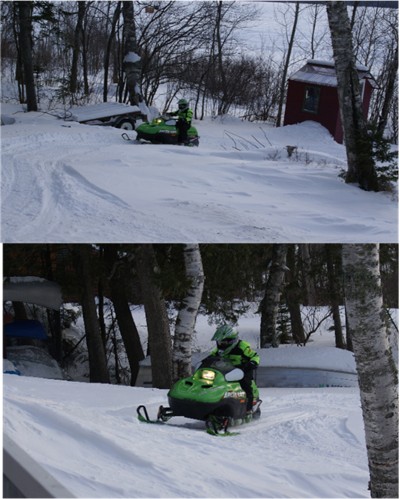 Yesterday, before the wind started to blow, it was a beautiful day. The sun was out, no wind, fresh snow on the ground from the storm. Just a perfect winter day.

So Murphy and I were playing frisbee. (she got 2 new ones this year for Christmas so she knows she is styling 😉 ) For those of you who know Murphy, she loves playing frisbee more then playing “”””ball””””…well that is not true either; she will play with a rock too.

ANYHOW, to explain the photo below. Of course, I tossed it too high and it got caught in the tree. She spent about 5 minutes walking around the tree, standing at the trunk of the tree, just trying to figure out how to get it down. Mind you, I am also throwing her other frisbee and a ball up there trying to get it too. Then these guys came home on their sleds and which distracted her and she moved off to the side of the drive and just looked at them.
It is almost as if she is saying:

💡 MAYBE IF I SIT PRETTY, THESE GUYS WILL GET MY FRISBEE FOR ME ❗ 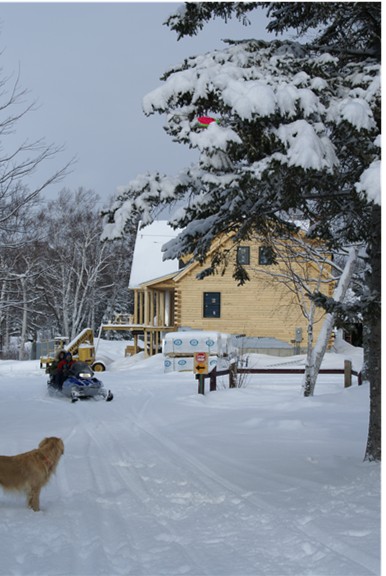 It was very funny to watch in person.

Yes indeed…snow again in Jackman Maine.
It started up here this morning before 5 and it seems, so far, about 2 inches. But as you can see in the photo, if you look close, the flakes are pretty puffy. 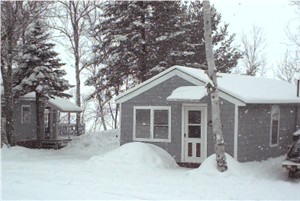 Big Wood Lake is coming alive today with ice fisherman too. I “”””heard”””” a sled out there earlier, just groaning and then I saw what the noise was about….he was trying to pull his ice shack out to the middle of the Pond. There is lot of snow on the lake so that sled was really working hard to pull that home made ice shack. Which I had my video camera on and ready. By the time I did, he was gone. PLUS at that time it was snowing so hard that I doubt I would even been able to capture him on tape.

If you are on your way up to Jackman today for the long weekend, give yourself a little more time, and drive safe! We just had a couple guests arrive who left Pa last night at 6pm.. normally a 9 hour drive which turned into a 12 hour drive. He said the whole way up, it was snowing so hard they could barely see.

They unloaded the sleds and are getting ready to ride. 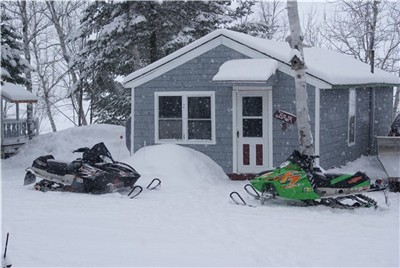 If you get a chance, look at Murphy-s Videos. I “”””caught”””” a very happy guest on video who told me a little about what his fishing week with his son has been like and what he caught for 2008.

Today, another guest said they caught 12 brook trout yesterday and today, so far 8 but she is keeping the 14 1/2 inch one she caught. She plans to take it home and let her dad cook it up “”””He really does it right””””

The ice is about 2 feet thick on this side but less thick on the other side of the lake by the Eagle-s Nest cove. “”””Maybe a foot”””” So if you go out, be careful out there.

Come on up cause fishing is good. 😀

January 10-13
After the most scenic view during the ride here we walked into “”””JESTER”””” cabin to be thrilled again. First time to the part of Maine. Born and Raised in Maine . I have been to most of all the different regions. Never here yet. Now I have… We have fished for brook trout for 2 days. We caught plenty. They are beautiful. I love brook trout. It is all I like to fish for. Had never pulled one up through the ice before. That was awesome. When the eagle-s flew over us for a while when we were fishing, was a spiritual experience. That was the best part of the trip for me. WE left the perch we caught for the eagle-s.I got some great pictures of them and of their footprints in the snow. We are 4 best friends having 4 of the best days I ever spent camping. I just love being surrounded by mountains. It is so peaceful when you are out on the ice.Just being quiet & absorbing nature around y9ou. I am looking forward to putting my canoe in this pond and catching more trout. TTFN Thank you fro the privilege of being here. It is a beautiful place to be ENJOY
Pamela & Corey from Winterport Cabin #1
4 great friends, 4 awesome days, 10 hours of fishing, 21 beautiful brook trout. “Released most and kept a few for the pan. What a way to start 2008 ❗
Shawn & Margaret from WInterport Cabin #1

January 17
Started on Rick-s 41st bd in Maine. minus 13 degrees Our friends Kenny & Ray are in Baja.
From Pa Cabin #1

January 21
“Had a great time snowmobiling. Rode to Canad on Saturday. It was a long day but fun. Ran for 3 days put over 400 miles on the sleds. See ya next time”
Ken Cabin #3

January 21
“We had such a wonderful time up here in Maine. The trails were awesome to ride. We even had a chance to ride into Canada which was so much fun.”
Michelle & Ricky from Long Island Cabin #8

January 22-24
“First time in a cabin environment. Once used to it -nice so far. Great sleep warm also. Snowed during the night. Great day on the trails. Was good to get back to a warm cabin. Great day, good trails, fantastic accommodation. Thank you for the cabin I will be back”
Paul for Rhode Island Cabin #6

January 24, 2008
“Moose-6; deer-20; 1 sled into a tree
Rode South on 89 until near the Forks, headed back 87N to 88W to 89S to Jackman. Total 101 miles our first day. Trails were awesome to say the least:!: Biggest bumps were in the driveway 😆 Flat Flat flat all day long. Friday, we headed toward Rangley but due to heavy traffic we came across, we detoured to Greenville then Kokadjo across to Rockwood down to the Forks and back; total miles 242. Not as good as Thursday but still some nice riding. Saturday “long pond trail Route 66. Then across the lake and around to Raymonds store for lunch in NE Carry. Over to Pittston Farm then back to Rockwood for gas. From there 88 took us west to 89 where we headed to Canada and back via club trail to Jackman. Total 202. Overall miles were 545. “
Glen and Carl from Sebago Maine Cabin #9

January 25-27
“WOW ❗ How FABULOUS IS IT UP HERE ❗ I saw at least 30 deer, a red fox, and an eagle. Can-t wait to go cruising tonight. I would love to see a moose. My life is all about the corporate world so it-s nice to be with good friends, cold beer, and relaxation. I-ll be back, I have to eat “”””more”””” food. ……..OK no Bullwinkle today, darn it ❗ Saw 7 deer run across the lake though. I will definitely come back up here. I had a blast with my friends. Oh I did get a pic of me sitting on the Moose with the wings on 6/15. Oops, glad we didn-t get caught. Catch a Buzz/C YA. “
Rhonda, Brian & Norma from Shapleigh in Cabin #4

I have not seen any major rain past few days…more just misty and warm. It was up to 40 yesterday so either the trails are simply being packed down and getting better or not. You will have to go to the JMRRCOC trail report for trail details.
BUT our fisherman are doing great this week. The top is a bit slushy but this has not stopped them from getting their catch right in front.

The Jackman sled dog club is hosting the Moose River Run this weekend. These races are not real easy to watch for spectators but there are places you can hike to to see them in action. OR hang at the clubhouse and talk to the racers while you drink a little cocoa.

For those of you who snowmobile, this trail behind the clubhouse will be closed this weekend due to the races.

Have a great weekend!

The weather in Jackman is a tough one to forecast. We listen to the Bangor news and drop 10 degrees from what he says or just watch the radar screen. Like today, it was snowing this morning…maybe only about 1/4 inch but there was NO SNOW in the forecast. Next week they are saying rain….I-ll bet that will be snow here.

Anyhow, Allen from Four Seasons Restaurant is our “”weatherwatcher”” here in Jackman. He calls in the temperatures to local meteorologist every morning and records the snowfall every year. He said this week in the month of December we have had about 4 feet of snow in town so out of town… there has be well over 5 feet totals out there.

If your in town, stop by Four Seasons Restaurant and say Hello to Allen…he has some interesting records of snow fall amounts in the past too.

I spoke to a groomer the other day and he said that last weekend was tough to keep up with the trails because of all the fresh snow (every other day) and the riders hitting the trails before they could be groomed.

He also said that with the snow we were to get (last night we got about 6 inches and a foot in some areas) they planned to go out today to begin the grooming. Temperatures are going to drop well below zero next couple days and the amounts of snow we have plus the sub-zero temps, he feels the trails are going to be in great shape by this weekend. They now have 3 groomers and should all be out doing their thing.

Plus they hope to be able to open the trail around the clubhouse soon…I believe the land owners are requiring one more gate to go up. We also heard that someone just received the “”contract?”” to groom from the Forks and north to us, which is why that connection south was not good last weekend. I understand they are beginning to work on those trails this week. We-ll let you now what we know.

SO this all answers some of my questions. There is more to it than just getting on a groomer machine and riding the trails.

Hope to see you soon!