August 9
“Thank you very much for making us both feel so welcome. This has been a welcome break from the hectic lives we both lead. Sorry we haven-t hung out or chatted much but we-ve taken advantage of the chance to just spend time together without the normal pressures of everyday life. All the best”
John and Rachel from London UK Cabin #8

August 15
Thank you for a wonderful get-away We enjoyed how quiet and peaceful it was. Tami we loved all of your little touches in the cabin.”
Erin Cabin #8

We had to go to Greenville yesterday to take Murphy to the vet (that is another story) and I could not believe my eyesÃƒÂ¢Ã¢â€šÂ¬Ã‚Â¦on the way to Rockwood, the leaves were already starting to change. Isn-t this still August?

Maybe this means an early winter?

August 31…Well, yes, our red maples here at Cozy Cove Cabins are also starting to turn. I guess I just did not notice that.

Well we had another beautiful couple take their vows here this summer… John, Jen and their son shared the moment together on August 24th. 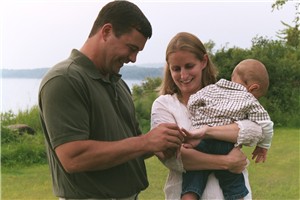 We truly wish the best for the 3 of them ❗

Dave and Reina came for a visit last year soon after loosing their golden retriever. Dave had said he was not interested in getting another pet…that is until he met Murphy. I think he fell in love with her. He even came over to see HER, not us, a couple times last year.

Anyhow they decided to begin looking for a new pup. Finally they found the right one this year and in April, brought him up to see us when he was only 3 months old. His name is Cabo. At that time, he had never met another dog and was not sure what to do with the happy go luck old lady, Murphy, that wanted to play with him.

Last week, Cabo and his family came to Cozy Cove Cabins to enjoy a summer holiday. When Murphy and Cabo first met in our lobbyÂ¦it was a classic moment. (of course, no one had a camera ready) For those of you who know Murphy, you know how she gets down on her front “”elbows”” with her butt in the air and her tail a wagging? Her “”I want to play”” stance? Well, they were both doing this in unison. It was the funniest thing to watch. We then let them out to run together and they were instantly friends.

Cabo is the same coloring and even the same size as Murphy right now so unless you look at the face or notice that his tuffs have not grown in yet, it was hard to tell them apart. Every morning before his parents went out to ride, he and Murphy ran around like a couple of kids. I captured a couple moments on video so be sure to check it out on “”Murphy-s weather”” videosÂ¦

BTW, if ever in the Saco area, you can meet Cabo and his parents at the Lucky Loggers Landing Family Restaurant. Good people!!!

Another first at Cozy Cove Cabins, a Luau. ❓

A group of 12 friends came to Jackman for their vacation this year and one theme they planned was for a Luau.

Of course, Mother Nature chose to give Jackman the same major storm as Hawaii had that day (what a storm came through here just at dinner time!) and the Luau had to be moved inside. But that did not stop the fun, the decorations or the festivities. They played Don Ho music and everyone got “”leied”” 😉 on arrival to the cabin. This is the group shot of them. 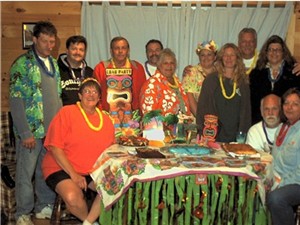 They are already planning for next year and the 2nd annual Luau!

August 12
PHOTO UPDATE-The bride and groom have finally let all of their family know about the wedding so this is a shot of the happy couple. We wish them the best of luck in their lives together! 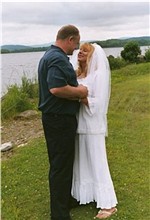 On Sunday, we had our first couple get married here at Cozy Cove Cabins. They really wanted to marry down by the lake but the weather reports were all saying “”big thunderstorms on Sunday””. I think everyone-s prayers were answered. It was just a little overcast but no rain…then the sun even came out the rest of the afternoon.

It was a lovely small simple ceremony performed by someone in town. Steve and I stood up with them as their witnesses; best man and matron of honor. I was honored that they asked us to do this with them.

Although the bride brought her wedding dress, she chose to dress simpler in a white cotton dress but she did wear her veil plus the necklace and earings her Mom bought for her. While Steve was down by the lake with the groom…keeping him distracted, I helped the bride set her veil and apply those last personal touches. I cut one of my white lilies for her and tied it with a blue scarf (her borrowed and blue). The groom wore a blue shirt and trousers.

Our other guests came also and we all toasted to their happiness after. The groom was funny…before the ceremony, he said “”no I-m not nervous at all”” but after, as he was trying to pop the champagne, he said “”I am still shaking””. So, isn-t that just like a guy to be so calm…but really not be 😉

This was an elopement so we cannot show any photos yet but I will get one up after they get a chance to get home and tell everyone. Best wished to the newlyweds!

Crayfish or crawdad, or what I like to refer to our “”Lake lobster”” are actually closely related to the lobster. They are found in “”bodies of fresh water that do that do not freeze to the bottom and are mostly found where there is fresh water running through it. They cannot tolerate polluted water”” which is good to know that Big Wood lake is clean and not polluted as there are many of these little guys in the lake.

One family who stayed with us a couple weeks ago had a great time catching the “”lake lobster””, especially at night. Seems they are attracted to light and would come to them when the used a flashlight or a glow stick in the water. So one night, they steamed them and had them as appetizers for dinner. I never had them but they said they tasted just like lobster, but more tender and of course, not as much meat as a real one.