February 2
“”We had a really relaxing fun time. Very cozy cottage and bed. Saw 4 deer. Would love to come back in the summer:!: “”
Terri &Dan Cabin #6

February 8-11
“”Day #1 – Early start to the day. Cold windy but was able to reel in 5 perch and 3 salmon. We have had a man down for several hours but he expects to have a full recovery for tonight-s agenda…another man down at 5:55pm. Face plant in food! I don-t know if we-ll make evening highlights with 2 men down. Oh Yeah, Jay is still missing! Where is he? 6:15-is there any hope of revival of the dead? Maybe another day.
Day #2 – Snowmobiling day – 180 miles 8am to 6pm. 4 sleds- 100 near fatals, 2 off trail episodes. No scar tissue””
Day#3-Ice Drinking-3 fish, 30 bears
Day#4 – Recover, Inventory and roll out. Had a great time at Cozy Cove””…Scott and friends Cabin #4

February 8-12
“”Had 12 of us all together, had a real good time. Thursday was very windy and cold-caught a 14″” salmon Friday. thank God for ice shacks. We had our own fishing derby and I think Jamie won with a 13″” salmon but had to throw it back. Kim caught the most. Very good food at BIGWOOD STEAKHOUSE. thank you. Hope to see you next year.””
Jamie, Kim, Sasha, Brian, Tom, Kim, Kellie, Darrell, Zac, Mith, Danny , Me and my dog Benton Cabin #3

February 9-11
“”Arrived today-pretty cold outside but we have a fishing shack so ice fishing was really good. Caught a few fish went riding on our sleds: had a great day and evening. Day 2-Went fishing half a day and had fun riding. Go out to dinner at the STEAKHOUSE. We went fo a nice 1 1/2 hour night ride and came back to camp-all 10 of us and had a big party. Day 3-Ice fish half a day then all 8 of us took a ride””
The Alexanders Cabin #2

February 11
“”We had a wonderful time relaxing and snowmobiling. The cabin is truly a wonder. Love does grow best in little houses. Many thanks:!: “”
Chris & Brandy Cabin #6

February 16
“”Really windy ride getting here. Sunday was great weather-caught 2 good brook trout and enjoyed the snow with the kids. Thanks for a great time””
Randy, Stacey, Logan, & Garrett from Chelsea Cabin #2

February 24
“”Thanks for the wonderful weekend.The camp was cozy and warm. The bed comfy and cozy. The trails…amazing ❗ We had dinner at the MOOSE POINT TAVERN and that was great ❗ Thanks again ❗ “”
Mike & Nia Cabin #6

February 24th
“”Came to fish. It-s nice out warm but very windy. The snow is filling in our holesÃƒÂ¢Ã¢â€šÂ¬Ã‚Â¦ very hard to fish inÃƒÂ¢Ã¢â€šÂ¬Ã‚Â¦ÃƒÂ¢Ã¢â€šÂ¬Ã‚Â¦I lived within a 100 miles of here my whole life and never been to Jackman. Very pretty area. Reminds me of the White Mtns in NHÃƒÂ¢Ã¢â€šÂ¬Ã‚Â¦Just a place you-d love to live and enjoy the benefits of such a pretty area.ÃƒÂ¢Ã¢â€šÂ¬Ã‚Â¦We had fun in our short stay here. It was a spur of the moment kind of thing. Next year we bring the sno-sleds; fish in the AM, ride and cusk fish at night. All planned for next year. SO until then we thank you for the use of your camp and amenities that go with it. See you next time. We will definitely be back…. “”
The Currys Cabin#1

I just looked at the 15 day forecast with accuweather and the temperatures will average in the 20-s the next 15 days and actually, I did not see any days that it will go above 30.

Although it does not say any snow amounts, they are calling for snow at least 5 out of those 15 days…that will take us well beyond the middle of March with great snow and trail riding.

I do believe we will have a very long snowmobiling season this year in Jackman…
….””we get snow first and have it last ❗

So if you missed riding in early January, come on up to Jackman for some great snowmobiling this March. The days are already getting longer and the sun is getting warmer….great time to ride.

This is a photo of our guest, Jim, making a trail off the lake to his cabin here, 2 days after our storm last week. 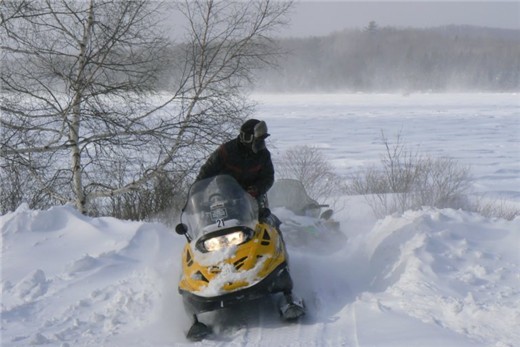 Wednesday February 21,2007
Since the storm, it has been pretty busy around here so I apologize for not adding any updates until now. They say we had about 30 inches from that storm but around Cozy Cove Cabins, we could not tell. Half of the snow from the lake blew onto our property I think 😆 We were able to get the area plowed but we did need an excavator to help move up and over. Plus all the other snow we had to move: roofs, decks, etc.

Trail reports have been great. Our guests have gone into Canada, over to Pittston Farms, and down to Eusits. The beginning of the weekend had some rough spots but now that the snow had a chance to harden up and groomed again and again, they have been great.

Kids this weekend were building forts in the snow mounds and sliding down the other side. What fun! 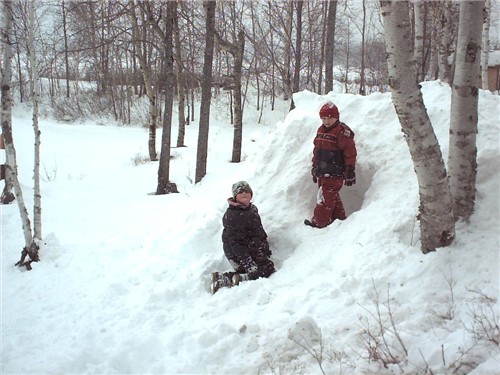 The wind picked up sometime last night so when we woke….oh wow, what a sight. It was still snowing but the wind was blowing so hard that we believe half of the snow that fell on the lake was on our property!
Steve wondered if he wasted his time plowing last night or thankful that he moved as much as he did.
One of our guests made the mistake of leaving their sleds out all night. Even though they put one behind their trailer, the sled was buried this morning.

It is unsure how much snow we actually got in the region because of the wind. Perhaps someone in town may have an idea.

So we have been plowing and blowing (which using a snow blower when it is windy does not really work well) and shoveling all morning. Now the sun is out and it sure is pretty.

If you are on your way up to the region today or this weekend, drive careful as the winds are blowing much snow onto the roads. The plow trucks are doing a great job with the roads but their still may be drifts. And no matter where you are staying this weekend, be kind to your hosts as they must of all had a busy day today trying to make room for you and your trailers.

I did get pictures this morning and will try to post them later but for now, back to work!

Well finally, here is one picture we took Thursday Morning before we started to plow. Today, it was even worse so we had an Excavator come in to help move some of the snow! 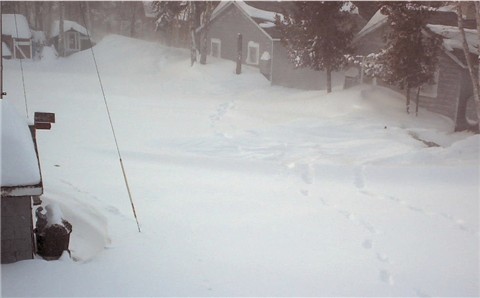 The winter storm is on it-s way. This morning we had about 4 inches by 9am. At 6pm, I was shoveling off our deck for the second time today, and it began to snow harder so that by the time I was done, there was another inch down where I had cleaned off first. Now at 8pm, I measured a total of 16 + inches on our deck. The wind has not started yet so who knows what tomorrow will bring. Steve is still outside plowing our drive area…his fourth run at the place. It is cold out but luckily, no wind today.
I guess no valentine dinner for us tonight!

SNOW IN JACKMAN UPDATE!
YEAH!!!! A storm is coming. . . Supposed to start tomorrow and continue through Thursday. If you are on your way up, travel safe! I-ll try to update this or the weather tab tomorrow night or Friday. If it is not too windy, I-ll catch a video for those of you not able to enjoy this white stuff we love up here.

Big Wood Lake was alive today with Ice fisherman riding their sleds, their Quads, and their vehicles to find that perfect fishing spot. And they are all doing great…well most. This is the Fishing Derby weekend too so I wonder who will win the big prize.

Snowmobilers were also all over the lake … riding across the lake to access the Northern trails. Reports from riders are that the trails are good. Some areas are not perfect but they are having a great time this weekend ❗

The temperature is 10 above but still a bite in the air as the wind comes off the Lake. Most say “”oh it-s not bad”” but too cold for me to go out there so sorry, no videos this weekend….maybe later today we will cover up and go out there. The sun is still too high for good photography anyhow :wink:[i][/i]

I have been away a week and many of our website things have not been updated…I apologize for this.

But I returned today and wanted to add a little note to Mom-s everywhere…or should I say to those of you who still have your Moms.

My Mom passed away last week…very sudden and unexpected. 🙁
“”Mae”” or “”Maniu”” as the grandkids called her was full of life, warm, gentle, loving and not only a great Mom but a great friend (she had many) to those who knew her.

Even though she was 87, she was alert, bright, smarter than me in many ways, loved to still be able to teach her children something new she learned, happy, always smiled and she loved to laugh. She would always tell me (dumb) jokes she heard….at least she could remember the punch lines.

She loved to hear about my day no matter if it was good or bad. She always enjoyed the tales of our guests: who got how many fish, or if anyone got a Buck, or if their was snow on the ground and of course, a daily weather report was always a part of our 6pm calls. She frequently would ask about certain regulars who came to stay with us as over the years; she got to know them through me and always remembered to ask.

I, as many of our guests and friends who know me knew, was very close with my Mom and there is such a void in my heart with her leaving us. She was my heart. I think the death of anyone you love is hard to accept but especially when they were not ready to die or you were not ready to let them go.

So I hope that all who read this, take time every day or at least more often then you do now, to call your Mom, tell her you love her, ask her advice (even though you really don-t want it), tell her about your life (at least things she would enjoy to hear) and simply treasure the moments you have with her. Please do not wait until Mother-s Day or her birthday or when you “”get time””. Time is a precious thing that can be taken away from us at any moment. Cherish every moment with her and any of your loved ones in some way. 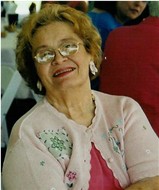 This photo was taken about 4 years ago at my niece-s graduation. She loved to laugh ❗