Indio has the best natural firepit of all of our camps.  It sits against a huge monster rock that has been there forever.  Periodically, we have rebuilt it (rocks seem to have a mind of their own) but it was due.

This year, Bill, who is a mason stone wall builder by trade, stayed in that cabin last weekend. He started out on Friday,  complaining about one of the many rocks that grow in our driveway or yard. (I think rocks pop up faster then dandelions sometimes.)  Anyhow, he (with our permission of course) decided to dig up this one rock in particular that he said was in his way.  What was seen on top was about 6 inches in diameter.  Once he finally got it up and out, it was about 2 foot by 3 foot rectangle. According to Bill, perfect for building something with.

As the weekend went by, Mr. ants in his pants could not sit still. He looked at the rock he found and the firepit and decided it would be a perfect flat rock to surround the pit.  SO he began. 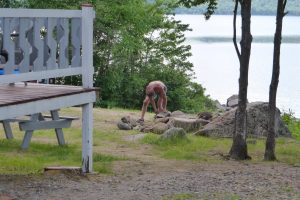 Thanks Bill. You did a great job. Happy Fathers Day and Happy anniversary. 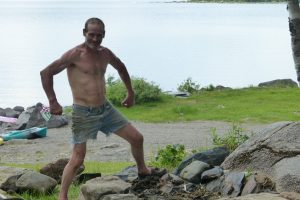